This diorama (1/76) pictures a German Jagdtiger that's been captured intact by American paratroopers from the 101st Airborne (Screaming Eagles).

The Americans are now trying to persuade a British M-19 tank transporter to carry their trophy back...

The Jagdtiger is the remake from Fujimi and quite a hassle to build.

I don't know why they even bothered molding the inside of the turret and gun breech, since (at least I) most of it had to be cut away to fit. But it still makes quite an impressive kit in 1/76 scale.
I didn't do any extra work besides battle damage and a non-functioning gun (it's only got the barrel left!).

The American paratroopers are from Airfix/Heller and I find them very nice. They have an attitude in their poses and look a bit like John Wayne in 'The longest day'. I even managed to paint the arm patches with the American flag and the Screaming Eagle.


The groundwork
I shaped out a piece of wood for the base. Then I used this kind of cardboard paper with styrofoam sandwiched in the middle (it's called 'architect paper' here in Sweden). Using this I made out the elevations of the diorama.

Then I covered the whole thing in generous amounts of varnish to seal the wood and paper, and after that had dried I built up the soil with celluclay. When the celluclay was dry I stirred up some mixes of different size sands and pebbles with white glue, and covered the road and where the topsoil is in the open.

The green stuff on the ground is mainly a flock I've found in Games Workshop stores, and together with static grass it looks quite good. But I don't apply it the regular way by sprinkling it on, no I mix it all up with white glue and water and the dab it on. I think it looks quite realistic in this small scale, somewhere in the untamed nature, not a well kept lawn... 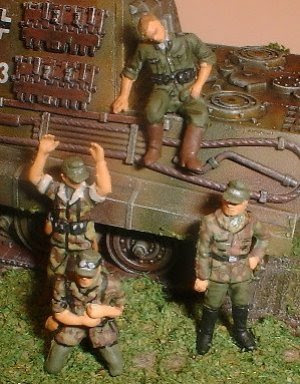 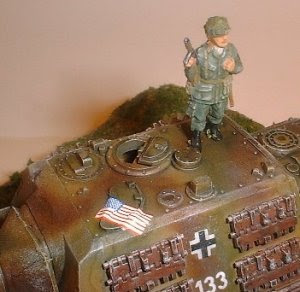 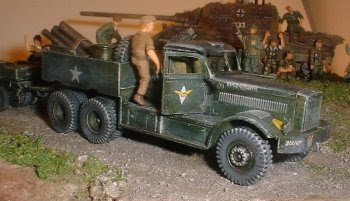 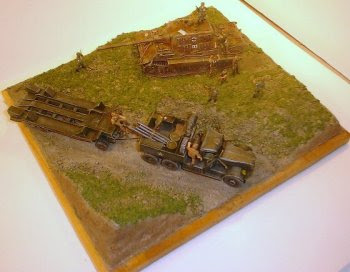 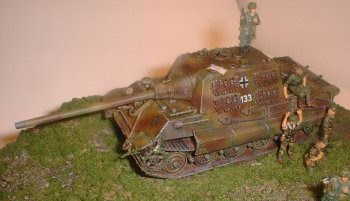 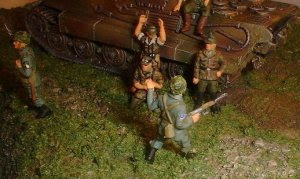