By Nuno Santos (original article formerly on the miniaturezone.co.uk website)

This diorama was built in 1995 consists of a fortification , with an antiaircraft gun and a truck . 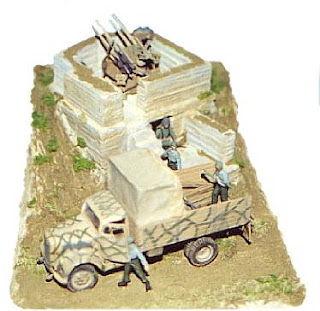 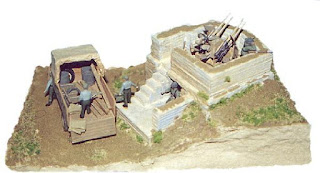 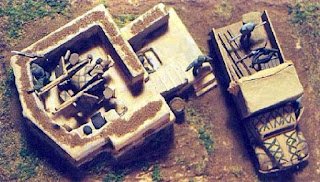 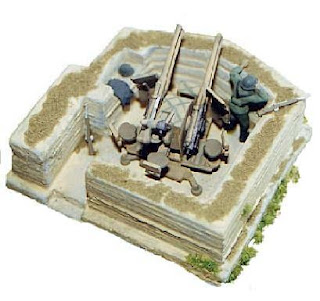 It's a simple kit without great detail. In assembly, the hardest part is the placement of the cabin. I rode the cab overconfident and the result was discouraging . The last piece was bad seasoned unite with the rest of the cabin. As the pieces have almost no fixation point is we need to study what part should be attached first - is that the assembly diagram indicating the placement sites but do not indicate the assembly steps . I had to take off some of the pieces , which was not easy and I went to hit the assembly , with some cuts and modeling clay to cover imperfections . 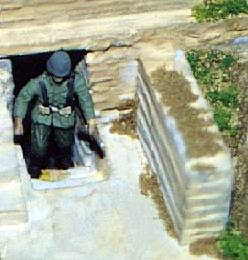 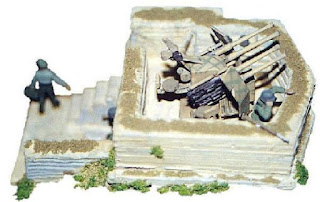 In this miniature , I conducted some modifications : I opened one of the doors of the cabin, put ' glasses ' windshield and doors ( I used clear plastic , malleable , I got a package ), the canvas roof has been foil manufactured cooking - the two arcs are small clips .

For miniature painting three colors : olive green , sand and black . I used the colors of HUMBROL : for painting miniature general used 63 -sand color , applied the 86 -light olive colored in camouflage stripes , the 33 -black for the wheels on canvas colors used 26 - khaki for the exterior and for the interior 63 . For the whole model , I applied the ink -mid 84 stone , quite diluted , to enhance the details. Finally in headlights 11 applied silver color and the radiator and side openings 33 used color , well diluted .

The anti-aircraft weapon (AAA ) is a Flakvierling 38 quadruple ( four guns) of 20mm and is considered one of the best aircraft at the time, with remarkable firepower - 800 rounds / min .. He was seated on a triangular base that each point had a device for leveling the gun. The three seats were removable , folding cranks and had room for the ammo boxes . The firing of the weapon is made via two pedals , in that each of the cannon fires two on each side.

The shot can be automatic or semiautomatic . The initial velocity was 900m/seg shot . with an effective range of 2,000 m . Because firepower , needed a lot of ammunition. The angle of jurisdiction of the guns was 90 º upward and 10 º downward able to rotate all around 360 º. We used a lot against low altitude aircraft and was installed in permanent premises. They were also installed in some vehicles - OPEL BLITZ ; Sd.Kfz 7/1 ; PANZER IV wirbelwind ...

Fortification is my creation and plaster . The molds were made with kitchen match sticks . It took five molds (Figure 10 ) : the top ( A) , bottom ( B ), the portal ( C ), the lateral wall ( D ) blocks to the steps that were carved after the plaster has dried ( E). The various sections were attached with white glue for wood. I painted the first structure , with color 175 - hellgrau 76 . Once dry , the color wash with 119 -light earth well diluted . 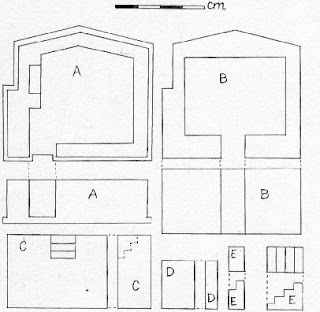 As for the soldiers , the three that are next to the truck that I adapted for sappers , are the reference AIRFIX 01755 - LUFTWAFFE PERSONEL . Modified only one withdrawing the hand tool . The other two soldiers in the fort are from the Matchbox ( 1982 ) and both were modified . Because they are made of plastic is malleable , with the points of the fingers ( thumb and index) you can change the positions of the arms , legs , head and trunk - for smaller parts ( such as hands and feet ) used a flat nose pliers , and with a knife I removed the objects.

Making a Stone Bridge from Styrofoam

Making a Stone Bridge from Styrofoam 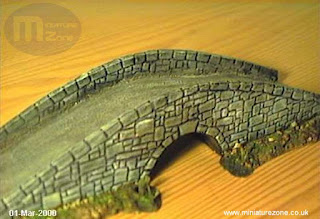 Bridges often form an important focal point or strategic element in a game, and can also often make attractive centrepieces for interesting dioramas.

Building from scratch is not too difficult and the object of this article is demonstrate how to build a simple but effective representations of these stone bridges.

Construction materials
The main material used to make our bridge here is EPS foamboard (greatly superior to expanded polystyrene) because it’s compact, can easily be cut without crumbling and is durable. You can buy it in sheets at hardware stores (a well known brand is called “Depron”) but you can also use the same stuff that little trays are made of that you find in supermarkets to pack fruit or meat.

In order to make the bridge we’ll first need a master and making this isn’t particularly difficult, though it can be a little time consuming.

For a basic bridge we need to make four templates from very simple shapes as shown here. If you click on the image below it will open in a new window. You can download and print the template onto A4 paper. 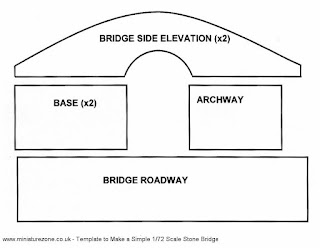 Print your masters onto a sheet of A4 size paper, then with a pair of scissors cut the templates out. The sides of the bridge and the base sections will be made from foamboard, so we’ll use shapes we’ve cut from paper as templates Place these templates onto the foamboard and lightly draw around them with a ball-point pen and then with a sharp craft knife cut the foamboard along the pen lines. 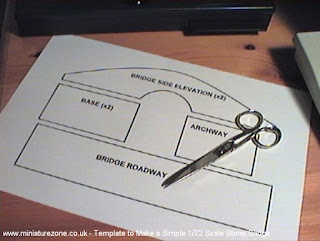 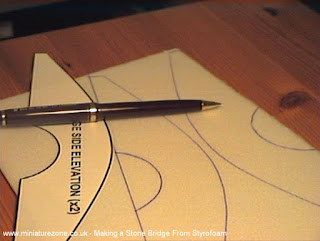 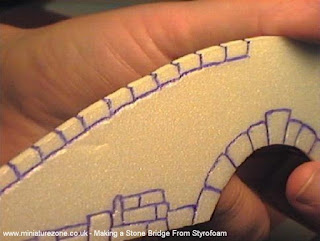 We need to make the pattern convincing so it’s important to take a little time doing this.

Best not to use anything sharp to do this, you´ll need to use a ball-point pen because instead of scratching on a design, we have to leave an imprint and the ball-point pen “glides” across the foamboard.

Once we’ve got the stone pattern finished then we can assemble the bridge.

Stick the two sides of the bridge to the bases with white glue and wait for it to dry overnight so it’s fixed well. 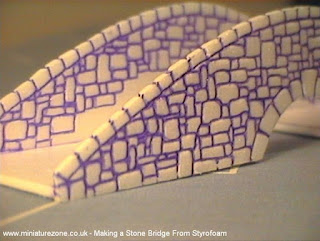 The next stage is to make the road section from stiff card,making sure that it curves without any creases and just stick with white glue (a bit tricky and you might have to hold this for quite until it’s stuck well). Finally the last piece to glue the underside of the bridge’s arch. 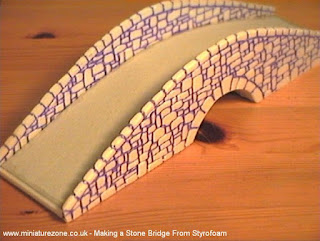 Painting is a matter of personal taste and everyone has their own techniques and preferences. I used artist’s latex based paints that you can buy from hobby shops, starting with undiluted black paint then mixing in some very very fine sand and once you have this mixture ready paint all over the bridge and leave to dry for a few hours.

Once the black paint is dry, take a suitable stone colour and give the bridge and roadway an extremely heavy drybrush and you’ll see that the stone pattern becomes very nicely defined due to the black undercoat staying in the recesses of the pattern - it should now resemble a stone bridge. Just to finish off give a final very light drybrush with some white or other very light paint according to your preferences.

The only other thing I added was a border of grass and small rocks along the side of the base as you can see in the picture at the top of this article. 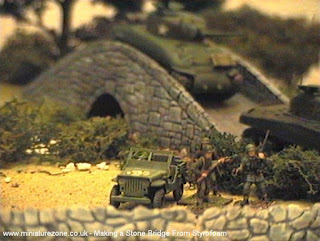