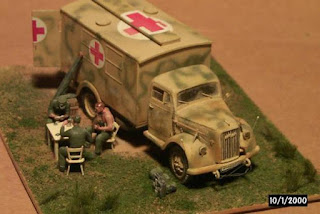 
The vehicle is a 1/72 ESCI Opel Blitz truck, painted in dunkelgelb with a green camoflage pattern. This vehicle was one of the most common German 3-ton trucks, produced in either a 4x4 or 4x2 version. Besides fuel and cargo versions, the van variant was common and used for ambulances, command,and communications vehicles. The van could even be seen on the tracked Maultier (Mule) version of the truck.

I opened up the rear doors and added four bunks using the stretchers from two ESCI SdKfz 251 ambulance kits, a desk/operating table, seat, and various boxes and bedrools. Windows were also opened up and clear sheet styrene glued in with Kristal Clear. Inside I also scribed in the door panels to match those on the outside walls of the van. Wood steps were created from a model RR kit.


The markings and license plates are decals from the kit, set down with Solveset. Clear windows and windshield was also cut and added to the cab. There were fit problems with the cab which required careful fit and putty. Also added to the cab was a rearview mirror, wipers, and width indicators on the fenders.


The grass was created with model RR flocking. The figures sitting, table, and chairs are from Preiser's 1/72 tank repair personnel (in hard, polystyrene plastic)

Most all the paint used were acrylics, though the flesh tones are enamel which can be blended a bit with a brush dampened with thinner. Overall the kit can be challenging but looks great when the fit is corrected. The figures are superb and I hope more are released.