This article is one of many articles and gallery contributions from fellow amateur smallscale enthusiasts all over the world that appeared on the old MiniatureZone website during the first six years its existence when there were only a handful of websites dedicated to smallscale models and wargaming.

The idea for this diorama came from a picture I found of a german Panzer III surrendering to british troops somewhere in the North African desert, and my diorama follows that, but more precisely at the British lines, due to a engine failure. That's why I choose to call it 'Kaputt på fel ztälle' whichtranslates from Swedish into something like 'Kaput in the wrong place'.

This diorama came second at the Swedish IPMS Open '00 in Stockholm. It seems I'm stuck at second place...;-) 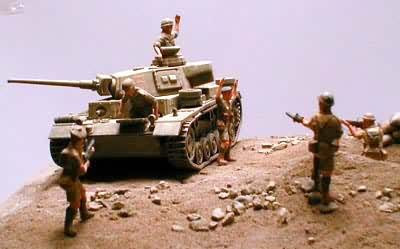 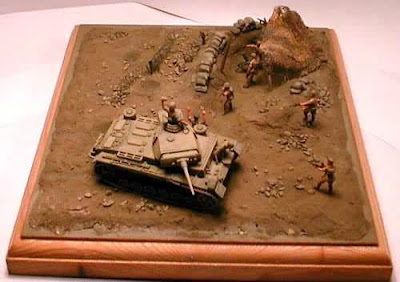 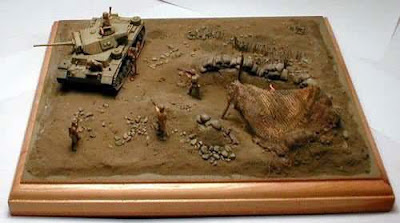 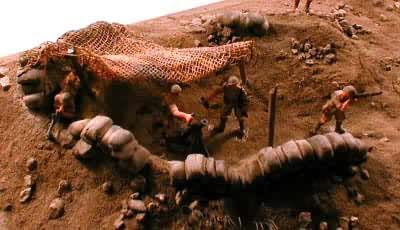 The base
The base is made from a piece of wood with smaller pieces making up the contours. This I covered with Celluclay after putting on a layer of varnish to seal of the wood. I then brushed on white glue and sprinkled rocks and the fine sand on

Sandbags
The sandbags are made from Superfine Miliput

Barb wire
For the barb wire I used very thin copper-wire which i doubled and twisted. Then I tied a small knot every centimeter and wrapped around a pencil. I chose to paint it straight gun-metal since there will probably not be much rust in the desert.

Camoflage-netting
The netting is medical gauze that was waterpainted in tan and brown nuances before added to the diorama.

Painting the diorama
The base I airbrushed in different tan Hubrol enamels and given a darkbrown wash and a lightsand dry-brush.

I opened up one of the front hatches for the escaping crew.

After painting it with Humbrol enamels and applying decals I gave it a light dust-layer togehter with the base to which it was superglued.

The figures
Nothing special to note about the Matchbox figures except that they are all action-poses, which kind of limits your dioramas. The surrendering german with both hands up is actually a British figure from the german kit, but I figured that even german tankers wore black berets maybe not in the desert) and with the typical British hip-pouches off he'd look german.

I painted the figures with (as usual) Humbrol enamels, but instead of using a darker wash I shaded them with darker nuances, and then I Super-glued them in place. 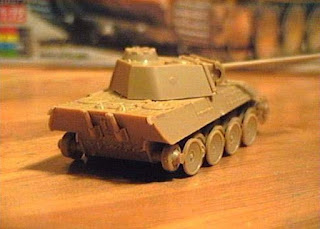 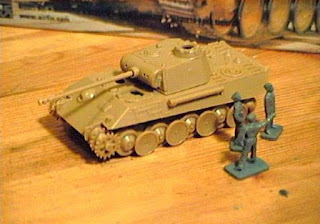 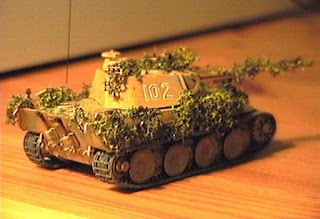 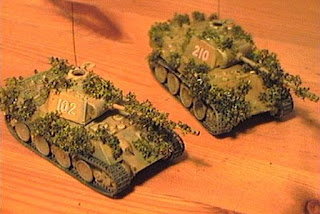 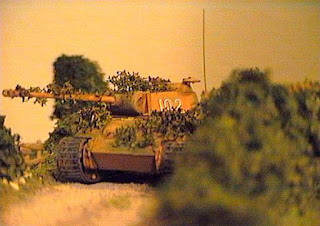 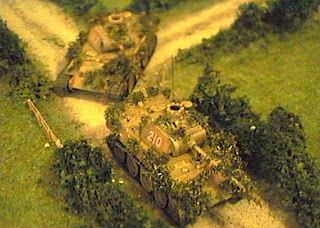 
The scene is about a small station anywhere in central Europe, where the troops are resting and trying to stock up to head forward.

It is a diorama in which I invested a great deal of time, it is the largest work I have ever built (removing a kind of medieval fortress, it is a pharaonic work). 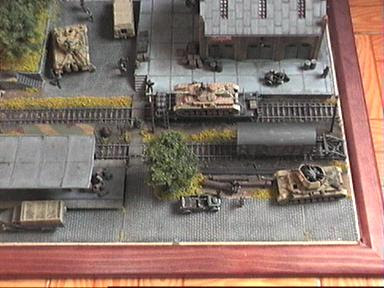 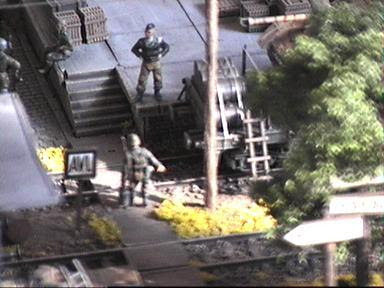 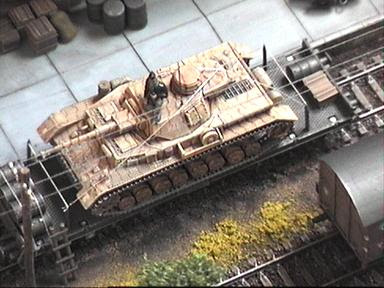 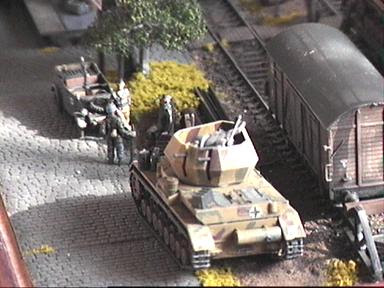 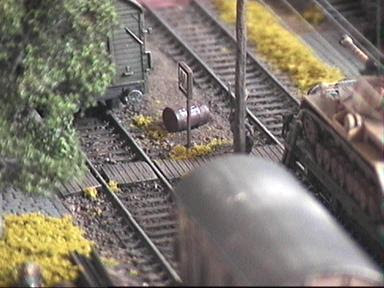 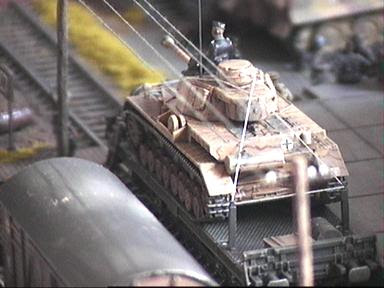 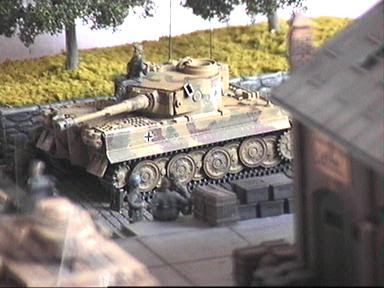 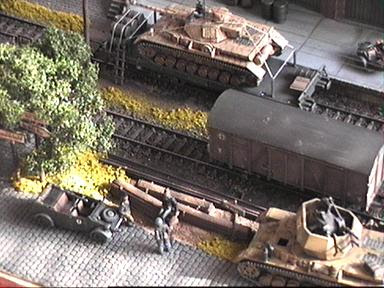 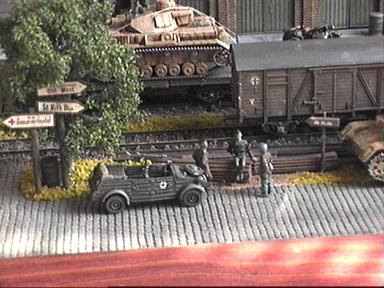 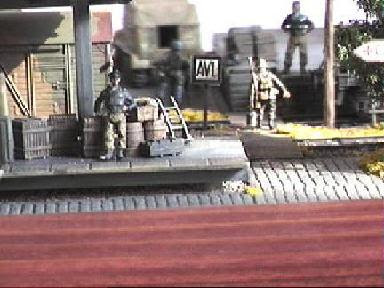 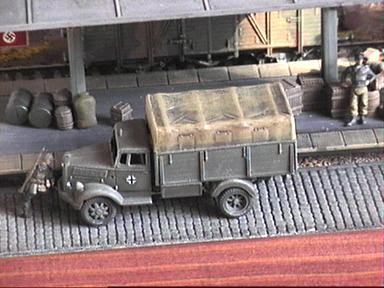 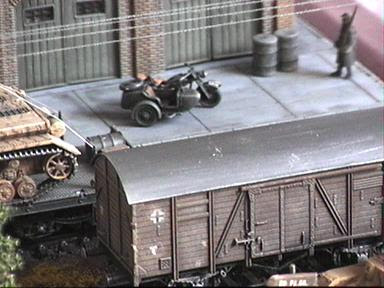 The vehicles are:
TIGER I of Hasegawa
Esci IV IV
FLAKPANZER IV from Esci
OPEL BLITZ by Airfix
B.M.W. from Hasegawa
Hasegawa's KUBELWAGEN
The accessories are of several brands as well as the trees

The three freight cars are at HO scale, as well as roads and buildings, although I think they are quite in line with the scene. 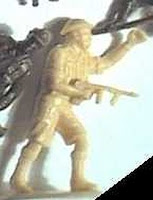 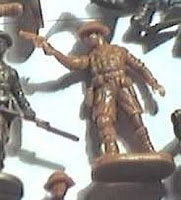 Figures with shorts trimmed down and white glue trousers applied. Once white glue begins to harden shape with suitable folds and apply futher glue if necessary.

To get the right thick consistency, leave the white glue in a container with the top removed overnight. 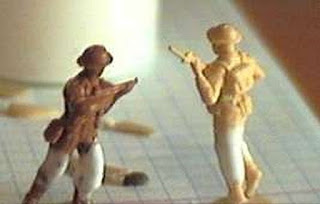 Once the trousers have dried, paint basic uniform colour, drybrush, detail, varnish and base according to your preferences