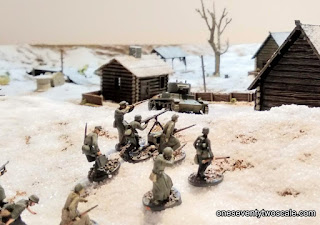 Uploaded a compilation of photos to YouTube from a game using a scenario adapted for use with Bolt Action wargame rules by one of my regular gaming buddies, Carlos.
If you click on the video image below it will open in a new window 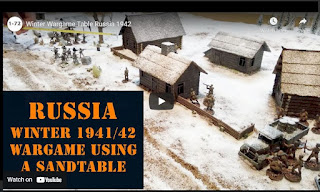 The scenario that Carlos adapted was written by Richard Baber and can be found on the Society of Twentieth Century Wargamers (SOTCW) :  It's really worth taking a look, well researched and easily playable.

The scenario is  based on an actual action fought by elements of the Spanish "División Azul" ski company  on a combat reconnaissance patrol,  reinforced by 40 Latvians from the German 81st Infantry Division. Moving through snow, eventually coming to Shiloy Tshernez. The Spanish and Latvians tried to outflank and surround the village and to converge from all sides. 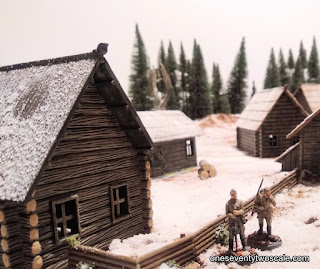 A good well-balanced scenario, and a game well played, thanks to fellow gamers who played this scenario, Carlos, Alejandro and Juan.

Ever wanted to add a helmet scrim effect onto your minis ?  I've put together a short video on Youtube showing how I do it with just a little gauze bandage, some nail scissors and a touch of white glue.
If you click on either of the images below it open up the video in a new window in youtube. 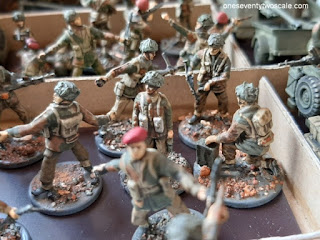 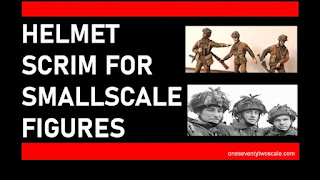 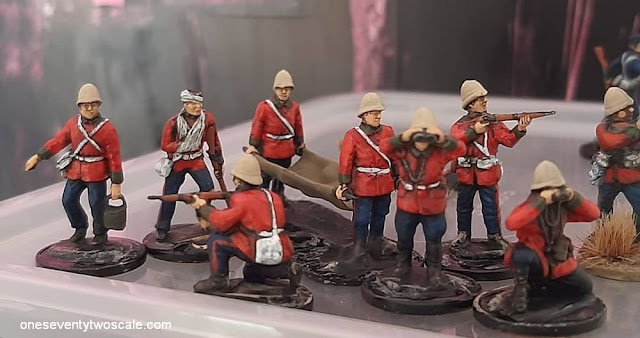 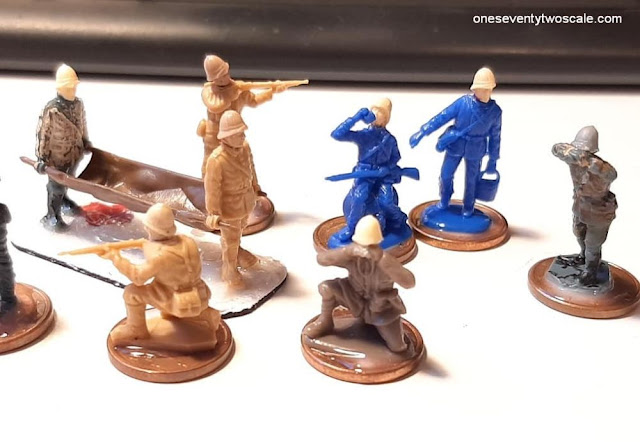 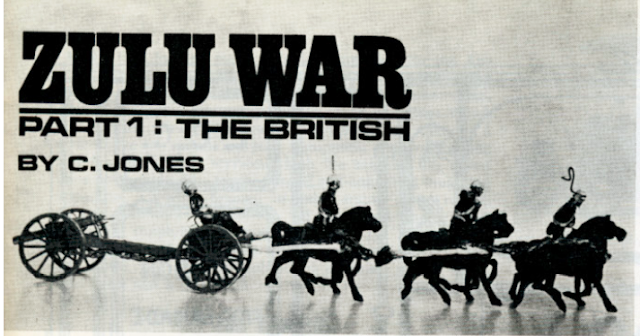 Last Saturday I got together with a good mate Iván, who's been a gaming buddy of mine for many years. Unfortunately we hadn't been able to get a game in together for quite some time until now.
Iván said he'd like to put together a scenario and I did the part I most like, setting up the gaming table.
The scenario consisted of a Chindit type operation, two groups entering the table with a mission to locate a bridge being constructed at some point on the far edge of the table. 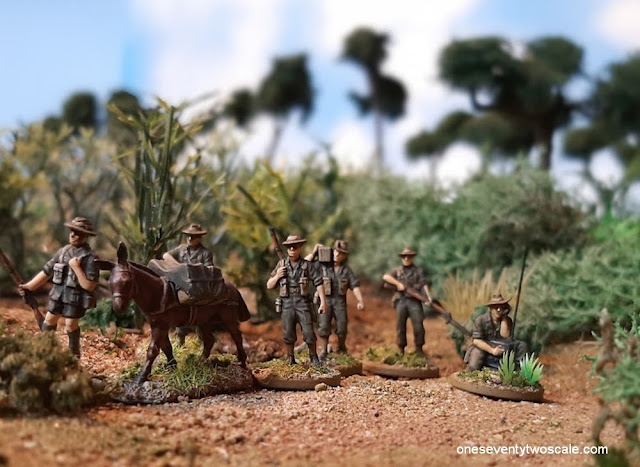 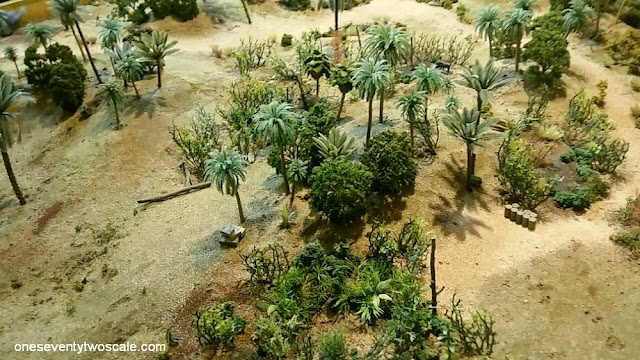 It's the first time the sand table's been used for a jungle setting and ended up consuming practically every plastic plant, tree, shrub, and palm I own.
We were originally going to game using the Bolt Action rules, but as Iván was bringing his young son to game too, he put together some simple rules to accompany the scenario. 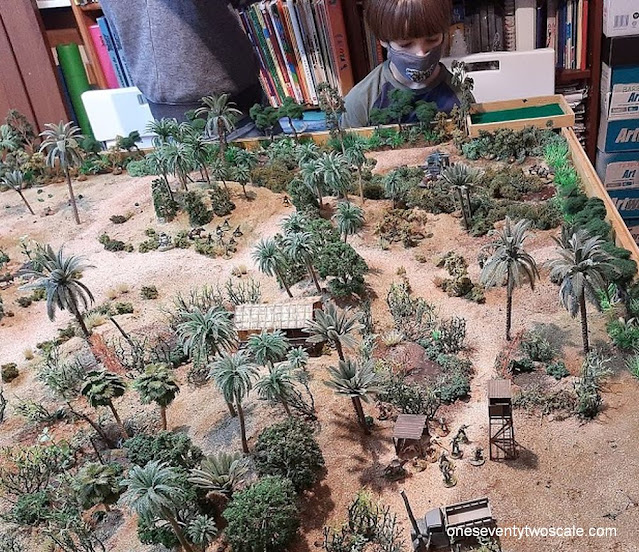 There were various points of interest that had to be reached before the bridge could be located, and each point coincided with an event occurring based on a pre-prepared table and dice throw.
Some of the events meant an encounter with indigenous jungle dwelling tribesemen, discovery of important information, an encounter with crocodiles when crossing a swamp, a Japanese patrol that had to be avoided at all costs, discovery of a compound with allied prisoners being used to build the bridge thanks to information from one of the tribesemen, recovery of airdropped supplies, and finally the location of the objective that had to be blown. 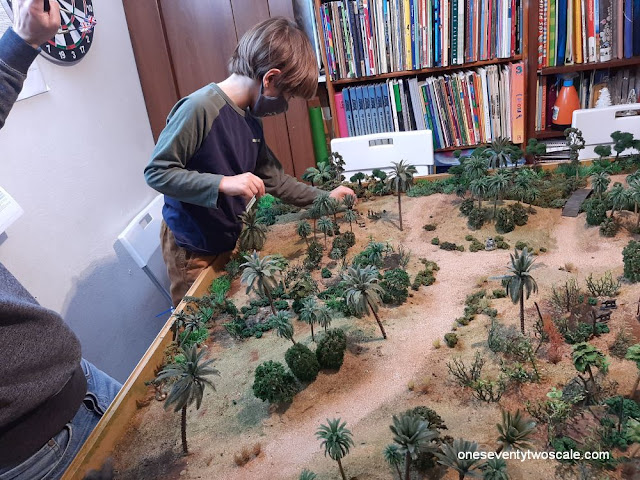 Iván used a "gamemaster" roleplay style together with the simplified rules so his son could take full charge of one of the Chindit groups. 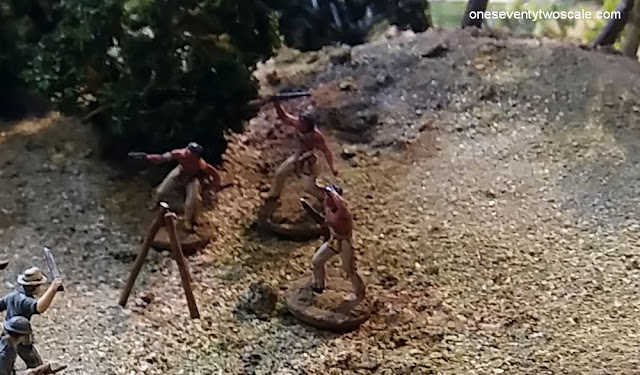 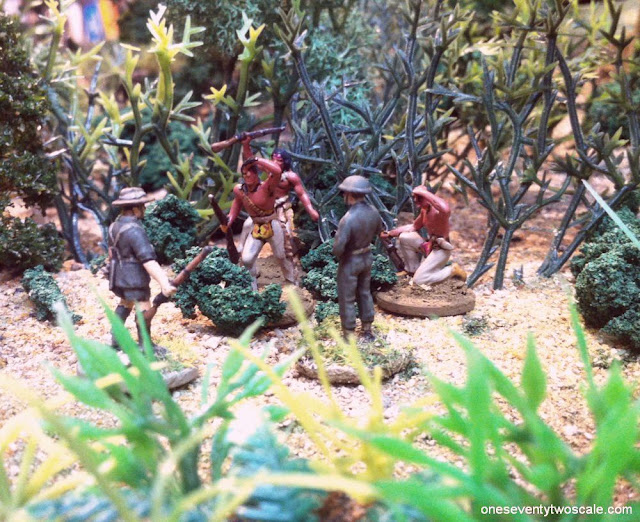 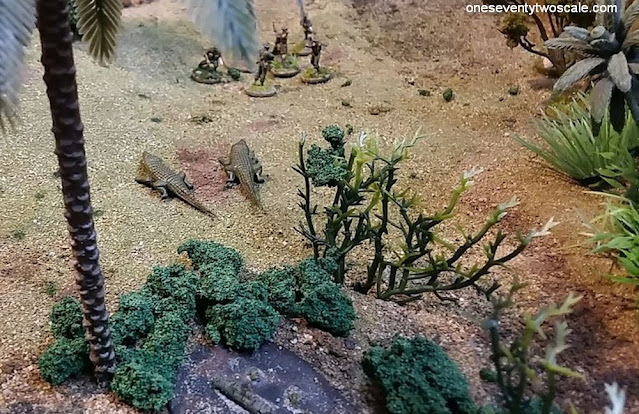 One of the dangers lurking in the swamps. 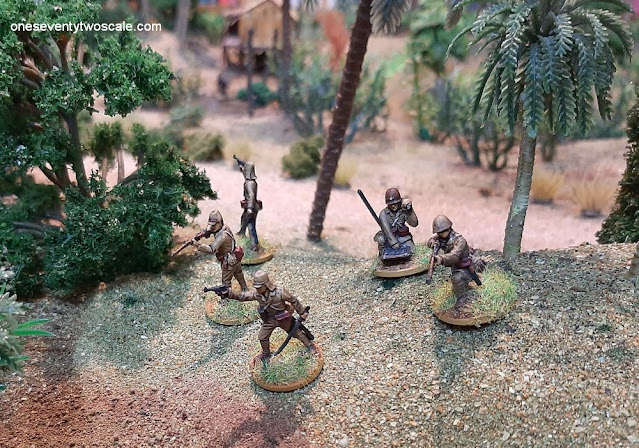 A Japanese patrol through the jungle. 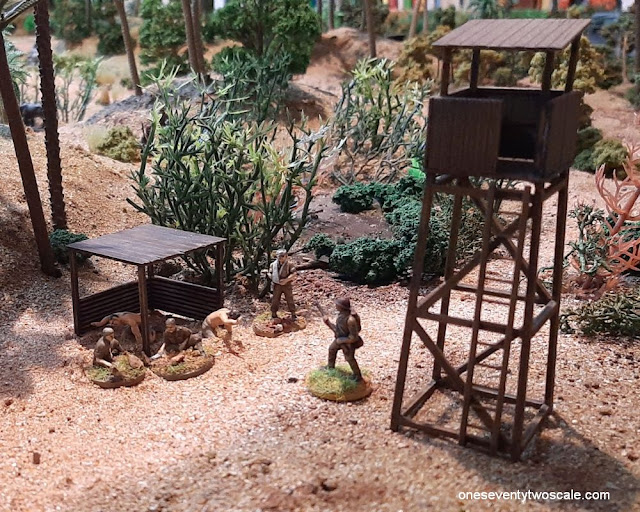 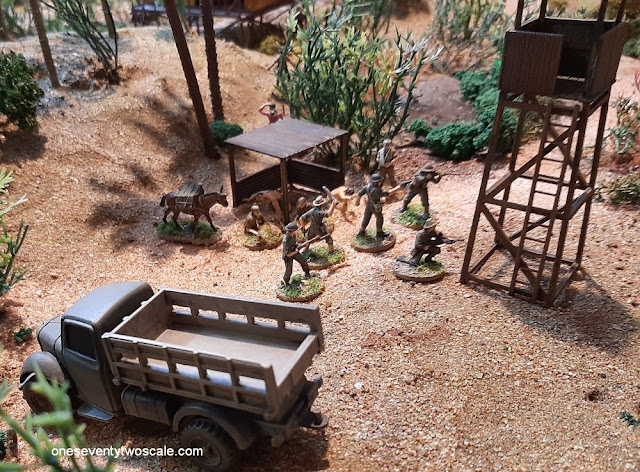 One of the groups locate prisoners thanks to help from the tribesman and overcome the guard. 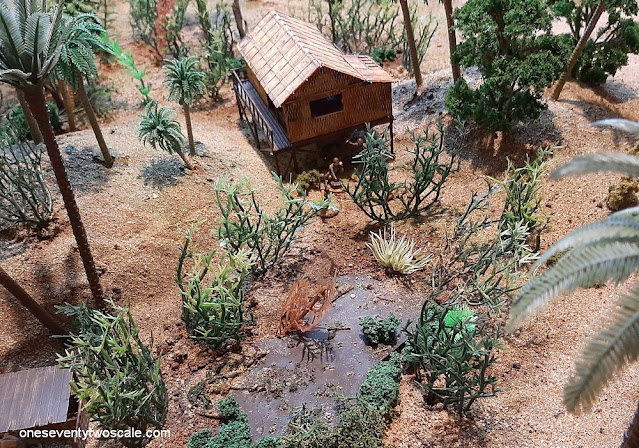 The guard's companions (drinking sake in an Airfix Jungle Outpost) hear the commotion and sound the alert. 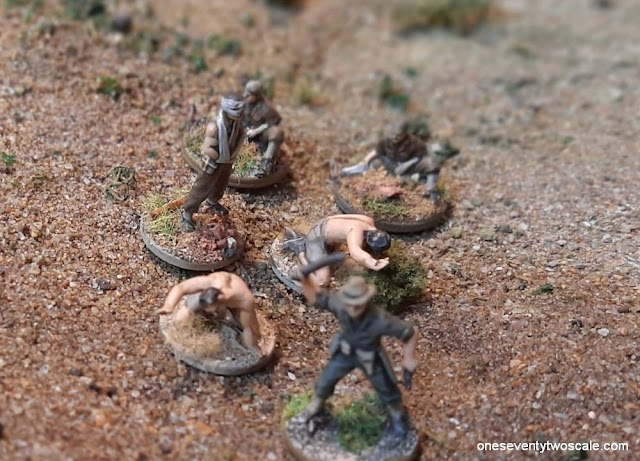 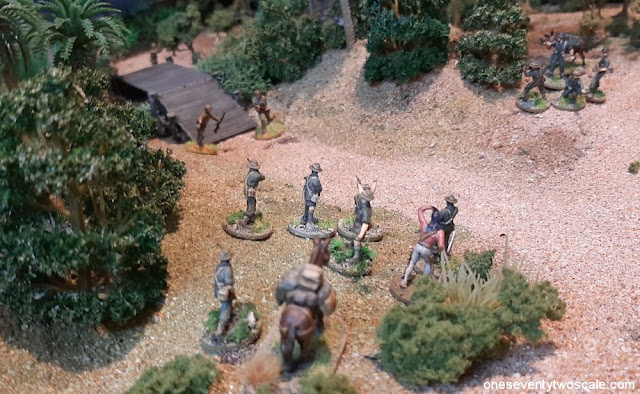 The two groups meanwhile locate the objective and begin the attack. A firefight ensues, the guards are overwhelmed and the Chindits place their explosives and BOOM ! 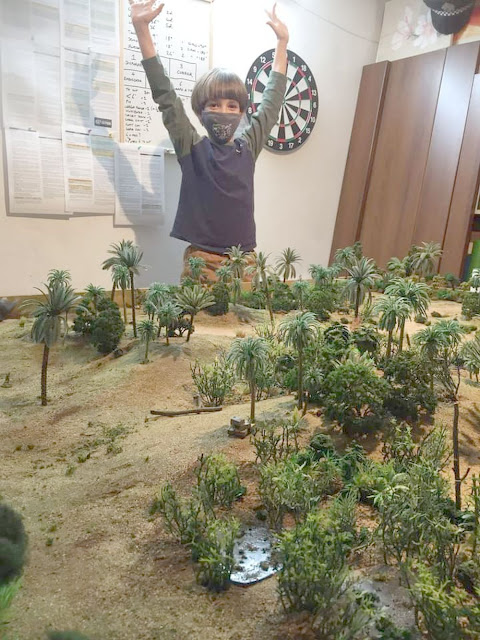 The Chindit commander celebrates victory !!!!
An entertaining afternoon, the roleplay style and simple rules meant a fast, smooth and enjoyable game, The young lad had a whale of a time, which is the most important and is what memories are made of.
Hope you enjoyed the pictures, I should have taken more, but at the time it wasn't feasable. I had in my mind ideas about maybe taking reposed shots and put together a more detailed report or story, but no doubt I'll end up sidetracked... too many projects :-)
By the way, I´ll finish by giving a plug for Iván. He's an illustrator for board games and has also designed and produced his own boardgame based on Nelson's failed attack on the port of Santa Cruz de Tenerife here in 1797.  You can see some of his work on the links below :
https://ivancacerescruz.tumblr.com
https://boardgamegeek.com/boardgamedesigner/103459/ivan-caceres
https://boardgamegeek.com/boardgame/235362/santa-cruz-1797
By JohnM 15 comments: